[This entry is cross posted at ordinary-times.com]

I’m thinking sandwiches but that’s no answer. Big salads? Roasts? The question I’m mulling is whether there are foods we specifically identify with lunch or dinner. I can see an argument for sandwiches being of lunch in a way they aren’t of dinner, but internet argument about what qualifies as a sandwich aside, I eat things between bread at dinner often and I have a meat and two or three for lunch with the same frequency, not that I keep a log.

Restaurant menus should be a help and at first, they seem to be. Many places have an after-five menu where there’s a shift toward entrees at the expense of sandwiches in comparison to the before-five menu. The more refined a restaurant is, the more likely that the dinner menu features entrees exclusively. That seems to be an argument in favor of tying the sandwich to lunch and I think it would be a very good argument except we don’t speak French (Je comprends qu’il y en a qui parlent français mais je parle en général de la population américaine.) Unlike the Gauls we don’t have an Académie Française to dictate how much liberté we’re allowed linguistically. In English it’s messy democracy we have to deal with on that front and private enterprises like Merriam Webster and American Heritage can stand athwart yelling that x means y all they please. The fact of the matter is that if a preponderance of English speakers decide that x means z, it’ll be reflected in their next edition. In our language, dictionaries don’t tell us what words mean. They tell us what we tell them words have meant so far.

For every Elysian Fields braised lamb shoulder with fennel, tomato, orange zest, and thyme served in a fine dining establishment vested in doing things the proper way, countless thousands of overcooked hamburgers smothered in ketchup are wolfed down at Applebee’s. Democracy dines on over-doneness.

My point is that you don’t have “lunch for dinner” no matter what is on the plate. You just have dinner. Breakfast is different. A slice of cold pizza when you get up is not something you’d tell your mom or parole officer is something you’re in the habit of having for breakfast, but you would still say that it’s breakfast. It’s a bad breakfast and not traditional bacon and eggs, but it’s what you had for breakfast. When you have bacon and eggs for dinner, you didn’t. At least that’s not how you explain it in English. Rather, you had breakfast for dinner.

People will claim that omelets are a respectable lunch or dinner without carrying the breakfast tag, but again, I’m concerned with English usage. Omelets are under the aegis of Le Académie so cafes and bistros carry absolution. Steak and eggs, chicken and waffles, and savory crepes all muddy the waters as best they’re able but that’s niggling at the edges. I should note that together those three items stand as excellent evidence in favor of the Oxford comma, but back to the matter at hand, the truth is that people love breakfast foods but only claim they love breakfast.

Breakfast is a chore. We may want eggs Benedict or biscuits smothered in sausage gravy but such things take time and Pop Tarts don’t come in those flavors. I eat an apple if anything. I don’t want to cook first thing. People will go out for breakfast. The kitchen crew acts as a stand in for the copious household staff most of us would need to achieve our ideal concept of breakfast. To get what we get at Waffle House we’d have to get up earlier and shred potatoes, mid-wife hollandaise, squeeze oranges, and stuff peppers. There’s a reason most people opt for dried oats with milk. Railroad Barons and Newspaper Publishers with names like JB have butlers, cooks, and all manner of people prepping for the type of regular morning meal the rest of us fantasize about. According to Nero Wolfe, a properly scrambled egg takes forty-five minutes to make. Such are the stuff dreams have maids for.

People love breakfast foods so much that having accepted that modern life doesn’t often allow time to indulge in, let alone do dishes after, before their commute we’ve split them off from other foods. They exist like a lost tribe, cohesive thematically and temporally untethered. You can move to the United States and become an American. You can move to India and become a citizen but you can’t become Indian. Leftover Chinese can be a morning’s breakfast but huevos rancheros in the evening is breakfast for dinner. What’s served in the morning is so divorced from the place holding title we’ve made breakfast a moveable feast we can plonk down anytime and it’s always a treat. Kid’s get it. They smile big when they find out bacon and sausage are being served at prime time.

There are two situations where the average non-Railroad owning Joe has time and inclination to make the breakfast he wants at home: leisurely days off and camping trips. The former is bliss and may bleed over and become brunch, but that’s just a polite word for breakfast when people sleep late or have sex with someone new. Today’s recipe is ideal for the latter but I do it at home all the time. It’s a one pan operation and every step is cooked at a constant temperature so if you find yourself out there in the wilderness you don’t have to worry about turning your open fire up or down.

I first had something like this in Boise, Idaho after a whitewater trip down the Salmon river. This isn’t the place to write about that trip. I’ll tell you about that some other time. All you need to know now is that Boise is home to one of the largest Basque populations outside of Spain and there’s a Basque district filled with restaurants putting out magnificent spicy dishes with stewed peppers. I can’t wait to get back.

Go ahead and get the bread out of the way first. I lied a little above when I said this only uses one pan. “A little” because it can be done in one, but “lied” because I used a grill pan to make the bread look better for pictures which I have no talent for to begin with. Sue me.

Slice the baguette (or French, Italian, or Cuban loaf) on a bias, brush one side lightly with olive oil and sprinkle lightly with salt. In batches cook oil side down in a hot iron skillet (or cheater’s grill pan) over medium high heat (or campfire) until lightly toasted, flip, and do the same to the unoiled side. Set aside. 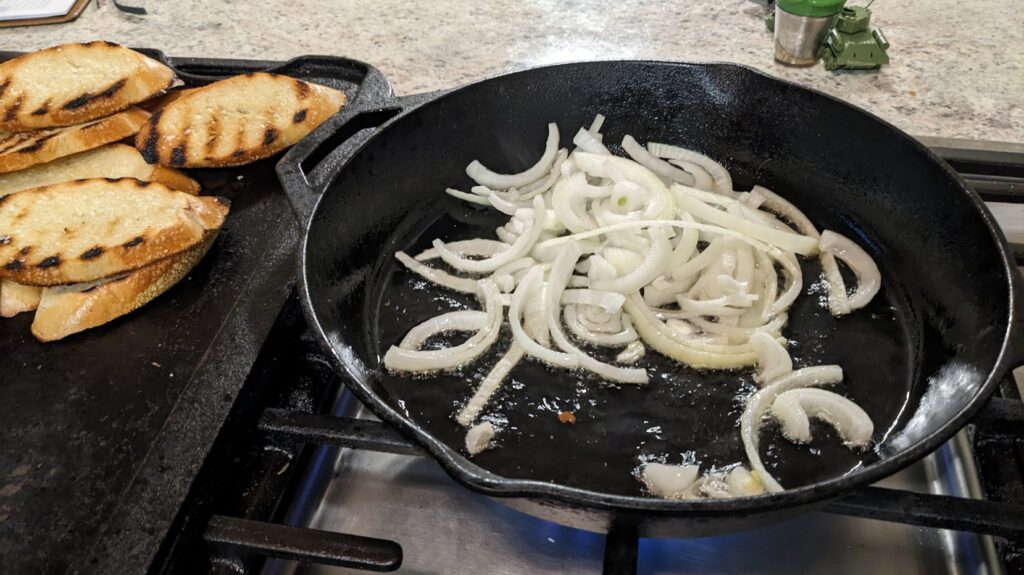 Note my son’s Russian T-34 WWII era tank in the top right. That got in by accident but it’s funny that this is a Basque dish. The Soviets introduced that tank in 1940 and it proved to be one of the most effective of the allied forces. They probably could have used it fighting with the Republicans in the Spanish Civil War. The Nationalists won the Basque regions.

When the bread’s done add a few glugs of olive oil to the skillet and then the onion. Sauté, stirring as needed, until a few of the edges start to brown.

Add all of the peppers and stir until they start to fade in color and soften, about five minutes.

Next, add the sliced tomatoes, and garlic and cook and stir every so often for another five or so minutes and then add the wine and paprika with a dash or two of salt and stir as needed again.

These were a gift from Hungary and I’m bound by gratitude to demonstrate how happy I am with them by including a picture. No idea what they say and Google translate would take the mystery out of it, but the red one has peppers on it so I rightly assumed it was the hotter one.

Add the wine and reduce, still occasionally stirring, the liquid to around half.

I used to do a different and slightly smaller version of this with only four eggs. I wrote about that back in 2014 and was able to write “crack one egg over the pan in each of the cardinal directions.” I have no idea why I’m fond of that phrasing because it’s nothing special, but no matter. This calls for six eggs now, so crack them over the skillet as far from each other as you can manage without getting too near the edges and ponder what I oddly think of as an earlier eloquence.

Cover and cook for four or five minutes until the whites set or longer of you don’t like runny eggs. Pepper to taste.

If you want to set out hot sauces with this go right ahead (ahem,) but the dish is half peppers to start with so it’d pretty much be coal to Newcastle. I think that little bit of wine keeps it moist enough to do without, myself.

If you’re really doing this over a campfire, I’m jealous. The last time I camped out I watched a Cardinals game on my laptop while I cooked which isn’t really roughing it and the time before that, though we spent five nights and six days on the Salmon River in Idaho without so much as a watch between us, we had guides and they made insane food for us as part of the deal. I don’t guess you could call any camping trip with a brigade de cuisine (Académie okayed) roughing it either. I miss cooking with fire away from the wonderful trappings of civilization that I pine for when I’m away from them like bathrooms and bear proof walls and grill pans to make digital pictures of bread look better and can’t wait to briefly get back out there.

Enjoy this breakfast for whatever.

1 thought on “Piperade: A Spicy One Pan Breakfast for Whenever”